(We miss our homes)

Using the contemporary media of painting, installation, and video, Chiapas artists from the Maya and Zoque peoples present recent works on the theme of earthquakes and material, sociocultural, and spiritual reconstruction from the perspective of Mexico’s original peoples.

The title in Tsotsil, “Jna’tik Jnatik”, means “We miss our homes”; with the sense of thinking about housing and living with mother earth.

With this exhibition of artistic creations, with dynamic practices, the MUY Gallery brings to Mexico City the results of a practice lasting several months: The artists responded to the natural disaster – the earthquake of September 7 – with the creation of works reflecting on the origins of the earthquake, and with a relational art practice, now continued in Mexico City, in the form of workshops and murals in the affected communities.

The four artists who lead the workshops and who receive visitors to the exhibition in Corpus Christi are:

And they represent other Mayan artists whose works are included in this exhibition (named below).

By sharing the Jna’tik Jnatik project, in Mexico City, as the site of the “twin” earthquake of September 19, the sensitivities and the need to discover the record of earthquakes in the consciousness of many were further opened up. It is changing the consciousness of Mexican society, by inspiring all of us to rebuild – better – our society, our material and emotional family locus. And of course, in the indigenous perspective community reconstruction is privileged, and above all, the relationship with “mother earth”. That is what Jna’tik Jnatik is all about.

Symbolically, the Mayan and Zoque artists invited to the Corpus Christi site occupy it by spreading their mural canvases in the eighteenth-century baroque building. Or they “reoccupy” it because the Corpus Christi convent was the first for “noble indigenous women” and now noble-hearted indigenous women and men return. Maruch Méndez, j’ilol shaman, and ceramic artist, will dedicate a welcome rite to the space for the use of the Jna’tik Jnatik project with a traditional Chamula performance-ceremony.

Méndez presents an installation with terracotta figures in a narrative configuration about the earth goddess and the origin of earthquakes in her own movement.

In painting, Antún Kojtom, Saúl Kak and Gerardo K’ulej introduce narratives through symbols of animist Maya-Zoque knowledge of deities and the world. His works make clear reference to the distinctive mural tradition in rural Chiapas today and historically throughout Mexico.

A video made by Saúl Kak about the earthquake and Maya-Zoque art is presented in the main room of Corpus Christi. With a long-standing practice in the medium of video, and works in the form of documentaries, docu-fiction and video art, Kak presents here a work that uses resistance video mechanisms, by interspersing performative actions of the artists, with testimonies of the affectations of the earthquake.

In this exhibition we present works of art by:

In general, it is remarkable that the current art produced by creators from the native peoples of Chiapas shows a multicultural disinhibition, genius in collective symbolic management, and technical flights, which launches this regional-ethnic school to an increasingly appreciated place within the world. contemporary Mexican and fourth world art.

The context for its aesthetic interpretation is the decolonization of our time, enriched by the Zapatista and Chiapas contributions in general. The recovery of tradition and collective memory in figurative language in the hands of artists (academically trained and self-taught) is an act of cultural empowerment. There is also the sometimes ironic criticism of the folklorization of their culture.

Above all, the transformation of traditional memes into narrative constructions of today’s life can be seen in these works. They use languages ​​of abstraction, sur- and suprarealism, and new media (installation, video, performance, and multidisciplinarity). And they show off the “g-local” perspective particular to the Maya-Zoque peoples, intellectuals and artists, universally relevant and appreciable.

What are the roles and functions of the indigenous artist today? Something between prayer-healer, moral leader, party clown, transgressor, visionary. These are the emerging roles within communities. Outwards, they include: representative, interpreter, provocateur, communication link with all the other artists of the country and the world and the general public.

So this artistic project takes from indigenous cultures the prioritization of the procedural and the relational. The creative process is not hidden, it is shared publicly. The importance of the “artistic object” shifts towards the relationship with the observer. And Chiapas artists often make them participants in one way or another, as co-producers and interlocutors. Therein lies the logic of including workshops and talks in this artistic project.

Among the artists of the earthquake project (Jna’tik Jnatik: we miss our houses), they agree that the earth has its guardians, owners or representatives, and that it is mother earth. They consider from the Mayan and Zoque worldview that mother earth is supported by four gods and that earthquakes have to do with the relationship between human beings and mother earth and the gods of her support.

These artists are associated with the artistic project of the MUY Gallery, where they have shown their work in several exhibitions and in reflections on the current indigenous art of Chiapas.

This multimedia project explores the functions of art/artist in the sociopolitical context defined by the natural and social disaster of the earthquake.

It consists of two videos, four workshops and a collection of artifacts related to the interventions of artists Antún Kojtom, Saúl Kak and Gerardo K’ulej, in civil society actions in post-earthquake reconstruction in Chiapas.

It refers to the conceptualization and realization of an artistic workshop for people affected by the earthquake in the municipality of Jiquipilas, and the creation of a commemorative mural of the local ravages of the earthquake in the municipality of Villaflores. The two actions were carried out collectively by Kojtom, Kak and K’ulej, mentioned above. Finally, this “artivist” project includes the creation of five murals painted in black and white on the interior walls of the MUY Gallery in San Cristóbal de Las Casas with designs by Antún Kojtom and details made by the group of other artists in this exhibition. and others, as a background for a celebration of All Saints, including the reminder of the earthquake. 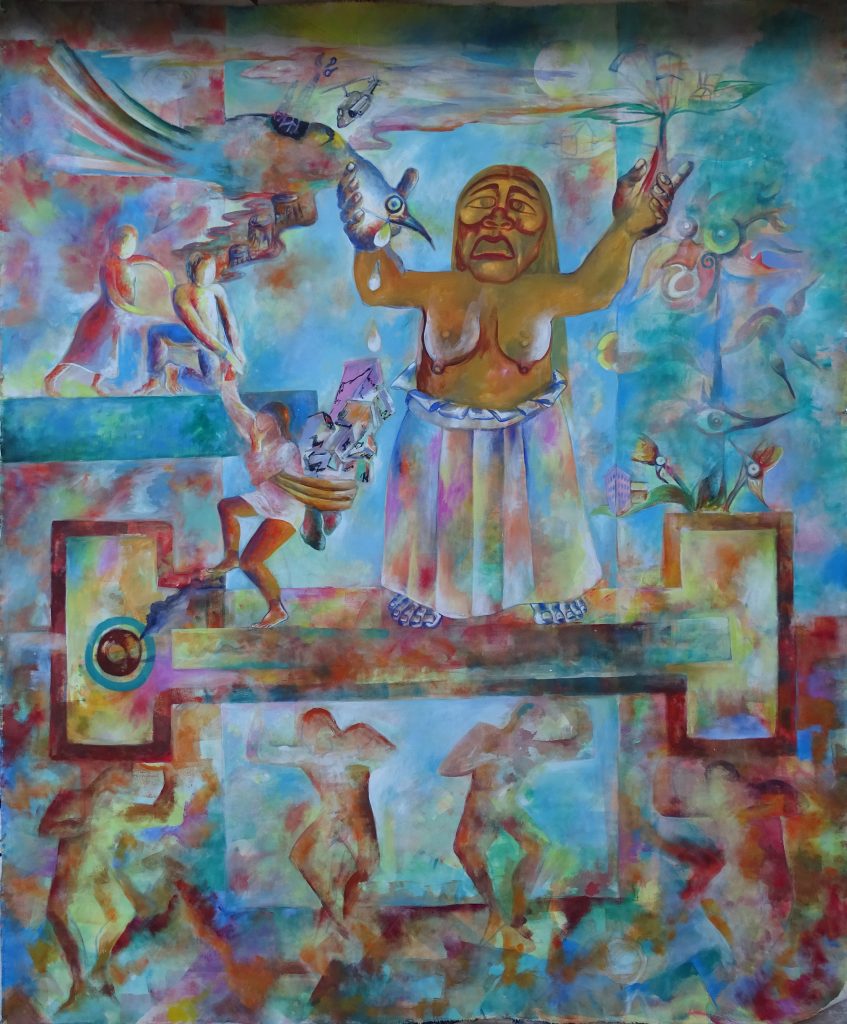 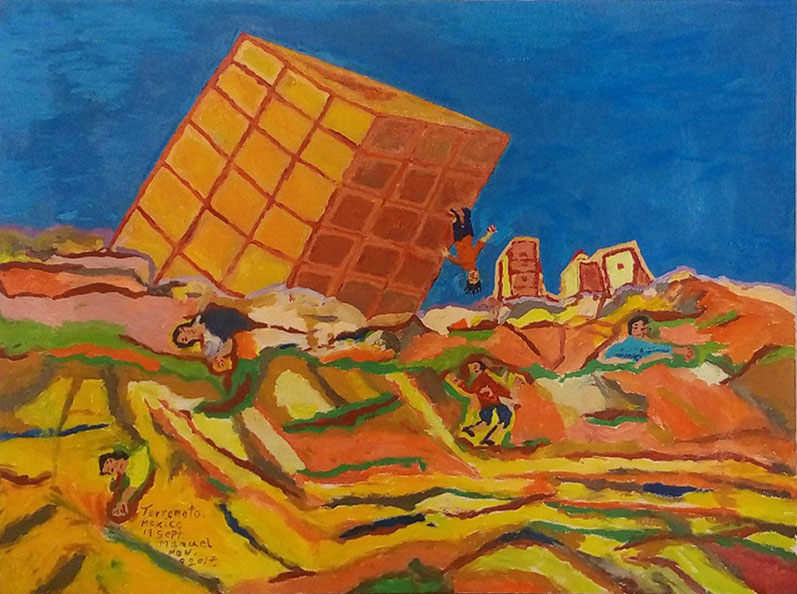 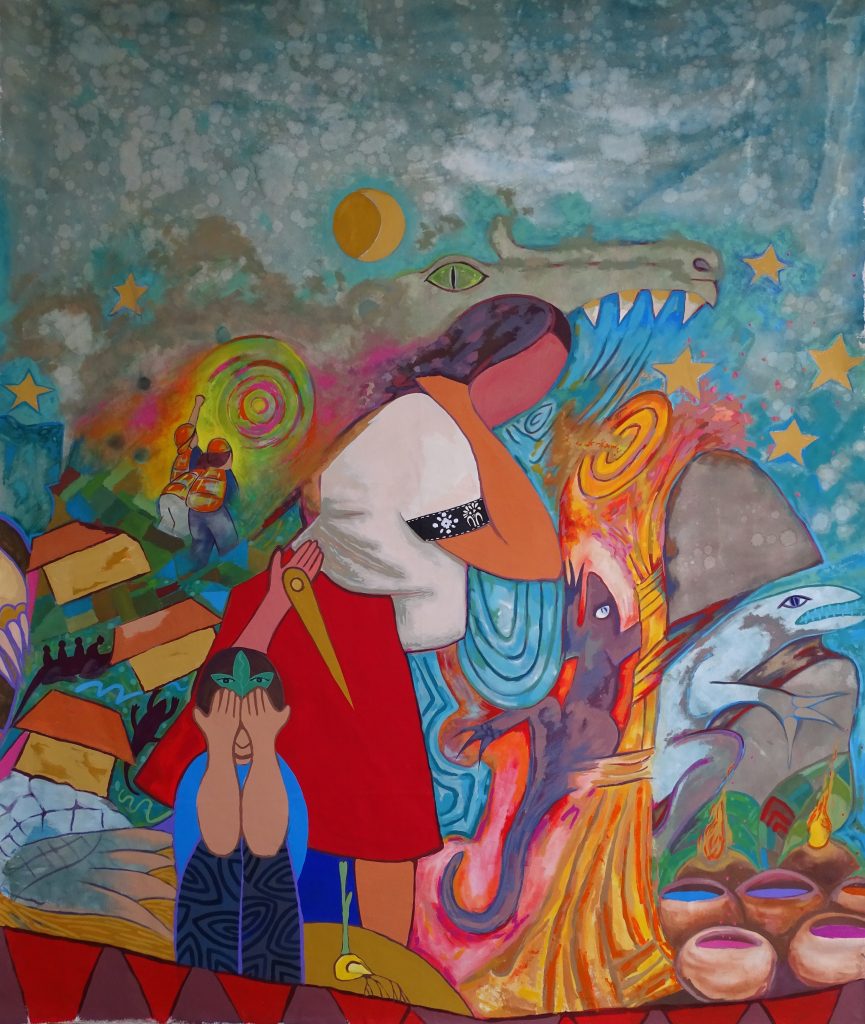 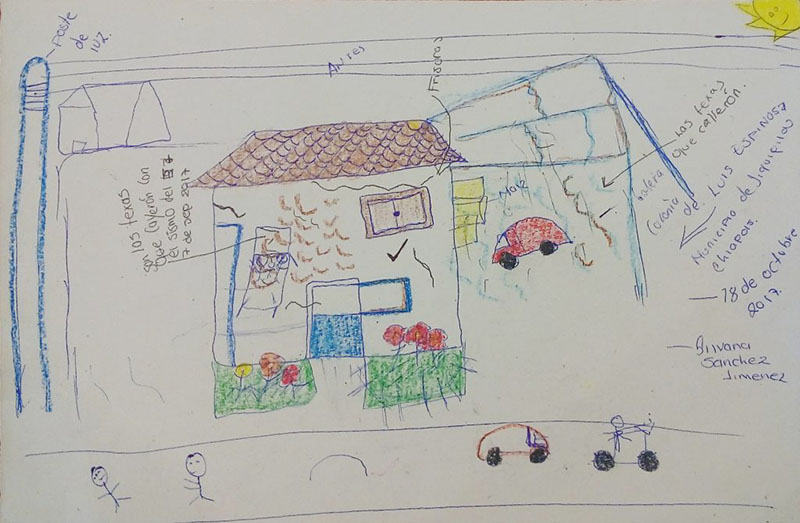 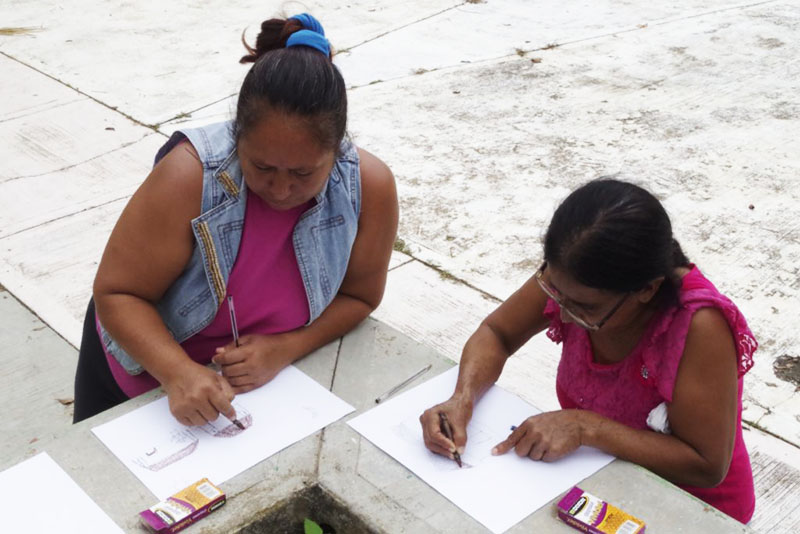 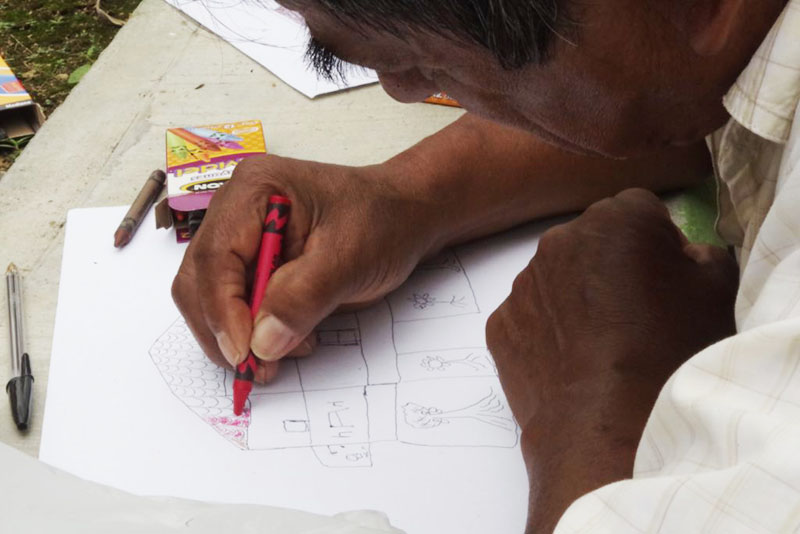 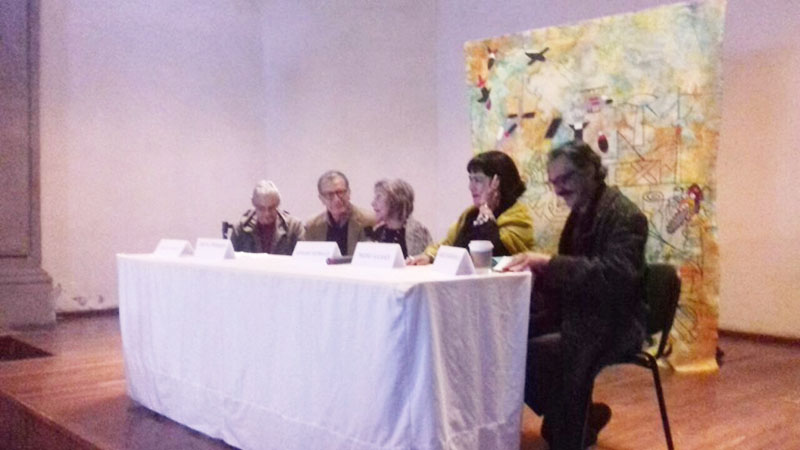 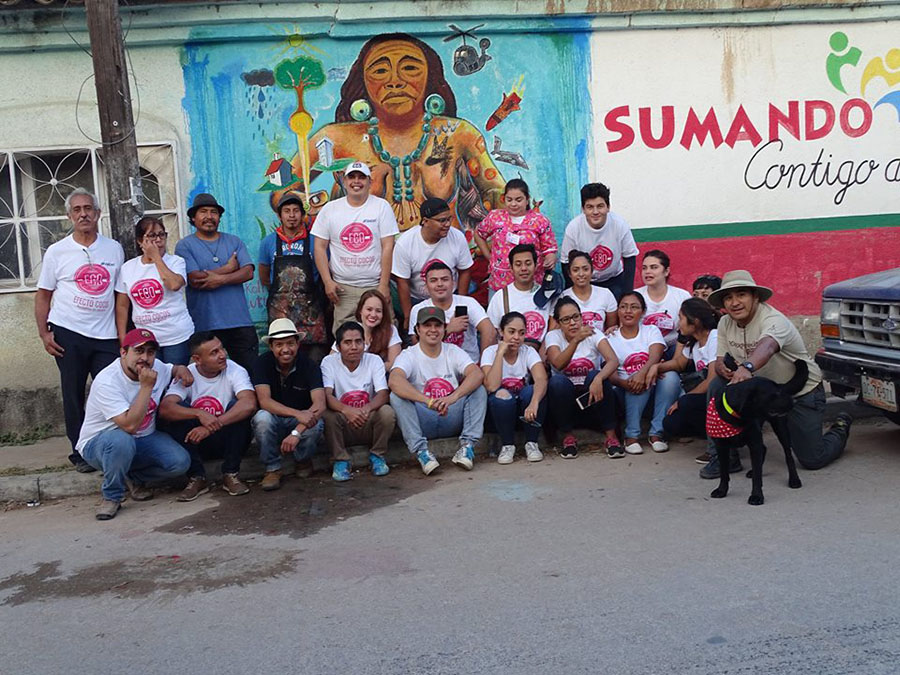 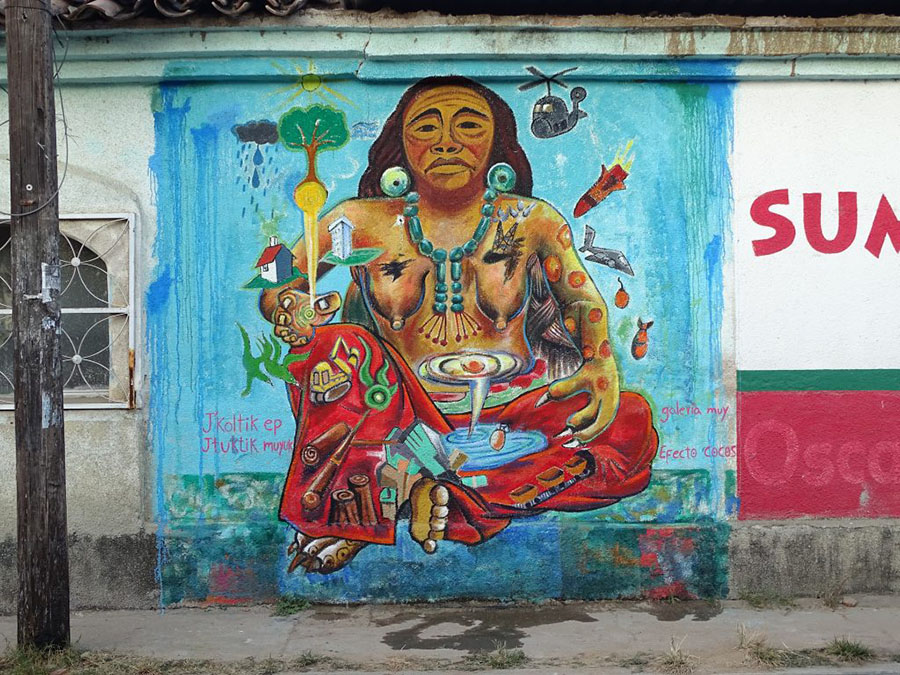 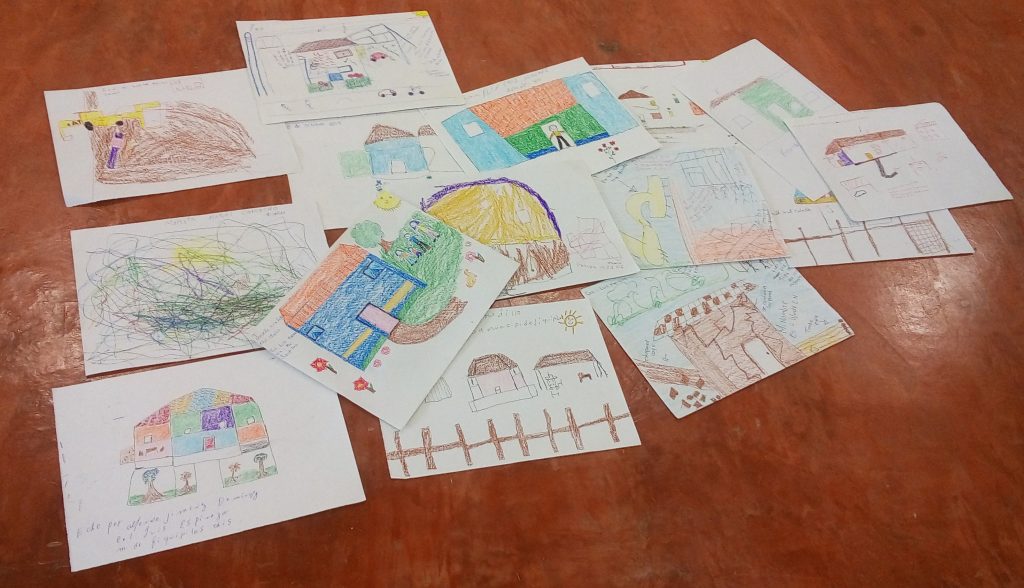 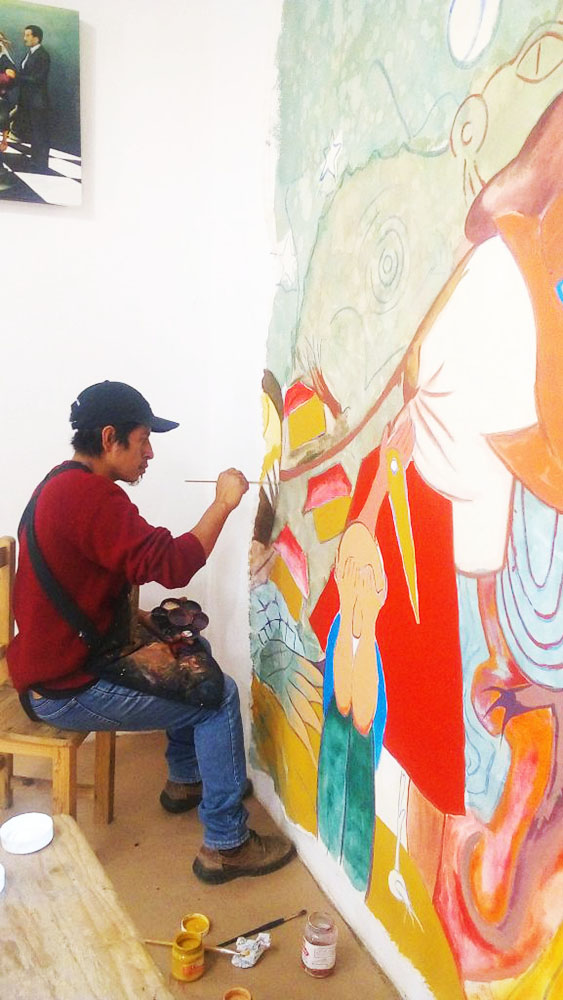