What is the essence, the genius, of P.T’ul’s work, and what is its origin? A very free imagination and very tied to the deep traditions of his town of San Andrés, Chiapas. A humble security. He is self-taught and therefore learns from what his hands teach by doing. Its inspiration originates from the knowledge of the Mayans of the earth, obtained from the conversation with their grandparents, transformed into forms. Of earth, first of all; what more natural? In painting too; his imaginary thought – through the image – has something prophetic.

Pedro Gómez (San Andrés, 1997) comes from (and nurtures) a family of artists/artisans highly informed of the great textile tradition of San Andrés and most of the ten sisters/sisters work on the loom, in the design of works artistic adaptations of tradition, and in the diffusion, communication and commercialization of their production made collectively.

Working on this exhibition for almost a year, P.T’ul saw it as natural to expand the show to utilitarian art objects, from his hands, and those of his colleagues at the MUY Gallery: PH Joel, Martha Alejandro, Maruch Méndez, Darwin Cruz and Saúl Kak. The art of contemplation and utilitarian art are in constant dialogue. While the inspiration for his sculptural art comes from the practical life of his people, practical objects carry the aesthetic in their own ways. They are prototypes of a new/old tableware for the house; what more practical than eating? And honor the rituals of peasant production for family and community cultural reproduction.

In order to deeply appreciate their culture, sometimes a person has to get away from it temporarily. P.T’ul left home at the age of seven! To receive a bicultural education in San Cristóbal de Las Casas. He never lost his north: the town of San Andrés, as the origin of his being and his genius, even when, with his own family, they reside in Jobel (the indigenous San Cristóbal). It is with these eyes inward/outward that he manages to paint what is critical and problematic, what has been suffered from divisions, waves of exploitation, and the contradictions of modernization. P.T’ul paints the weaknesses of his people.

And he molds the forms of hope, made by his indi-collective creative hands, originating in ch’ulel maya/zoque.

It is a piece that talks about unity, where the traditional authorities all collaborate to raise their voices to invoke the good of the people. The healer is floating among the piece, such an important physical healer, soul healer, dream guide and midwife, the only ones who take care of everyone.
In the palm of the hand is the woman, mother who procreates life, gives growth, transmits memory as well as knowledge that gives community identity, the hand is the sign of strength that holds our root of origin.

A mother carrying her baby, the baby represents the sower who has come to the land to work on it, sow, reap fruits, have communication and dialogue, he pays an attentive look towards all natural signs, such as strong winds, droughts, also when offerings are offered to feel appreciated.
The sower or farmer knows everything that is on the ground and what he keeps inside, and the earth knows man if he is united with his nahual, the guard animal that has been provided to us since we were born. A representation is the opossum is found in the chest and between the belly where signs of our surroundings and our state of health are perceived. 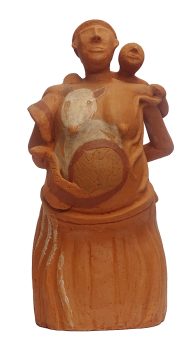 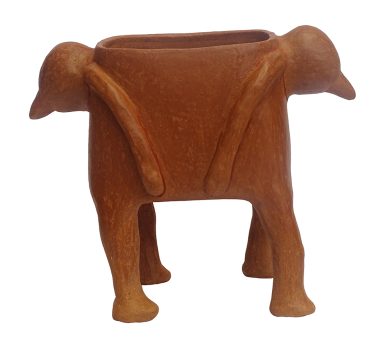 It is a square figure with four legs, it has two people with the faces of birds. The traditional musicians accompany the authorities of the town in each ceremony, at certain hours of the morning, noon and night, they play the harp, the flute, and the drum, they have a great commitment that are fundamental for the culture and for the town. People have the faces of birds, because in the morning the birds sing when the sun is rising it has a meaning, when the sun is setting they also sing that means that the sun is already saying goodbye, the birds warn, there are also others In the rainy season birds sing in groups, these songs are a message for the community, there are songs that warn.

It is a figure of two people who are united at the head, in the front part he is holding corn representing the delivery of the flag, leaving the new generations, and the young man of the new generation is connected with memory and all the knowledge that grandparents have about life, tradition and worldview. For grandparents it is very important that the new generation listen to them and that the field practice of harvesting food is maintained, this gives us identity, life, health and nourishes us physically and culturally.

It is a figure of a bull, above it has a house that says vakax na’ (house with structure of a bull). In the community, when a house is built in the middle, the head of the cattle is buried, it is so that when there are diseases and bad energies or when evil appears. The bull is the one who has to defend the family in that house. In San Andres, where I come from, they have this belief, my grandparents, my family continue to do it here in Chiapas.

day of the dead offering 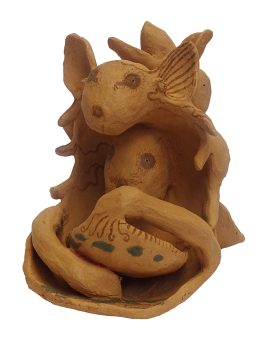 It is said in the community that when a mouse wants to become a bat, first it has to face the tests of nature, it has to stand on the side of the road. When a car is passing, it has to cross with three jumps to the other side of the road, if it manages to cross then it will be a bat, and it will fly through the sky. It will be a pollinator and will distribute the seeds of the fruits. But if he fails to make all three jumps, gets run over, or freezes in fear before crossing, he will lose his life.

This work is built through iconography of textiles from the Mayan peoples. United their points, they appear a star. Towards the bottom there is an eye, with a big look; it is he who cares, observes and illuminates the survival of the original peoples when they go through difficulties. 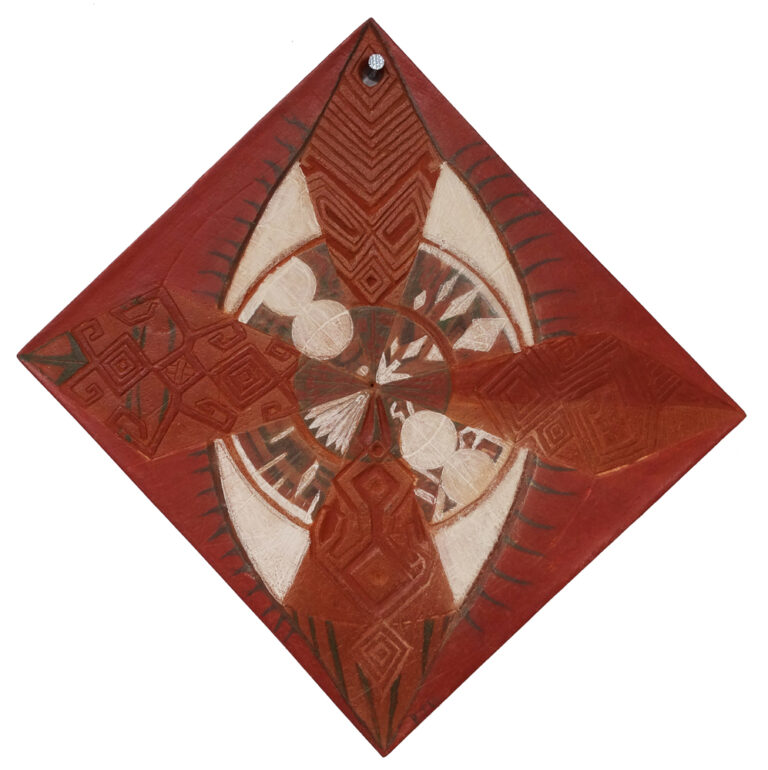 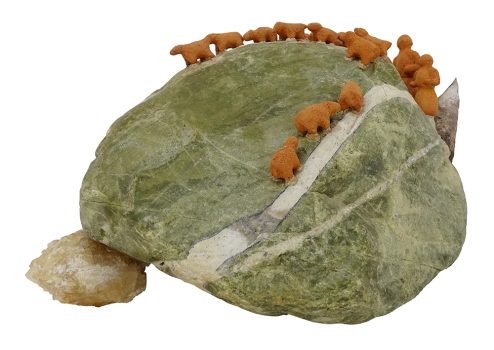 This piece arose from a memory when my grandmother went to muk’tabits (big hill) it is a place where they lived for a long time, it is a big hill, she walked an hour and a half to take her sheep to graze, she took her grandchildren to teach how take care of the sheep, how to cut and plant vegetables, look for firewood and visit the springs on the hills. This reminds me of the taste of the water that comes out of the rocks, of the sheep formed on the paths of how to care for and feed them, to have a good wool and with that to make clothes.

The sower is the representation of the farmer who sows the land, at noon when he reaches twelve, he sits and observes his plants if the seeds germinate. It is when he takes advantage of thanking life, he asks for the care and well-being of his crops, because it is where he obtains food and life, in a way of living, of filling the home with food.

There are trees that when felled only the trunk remains and the roots sprout again, the branches begin to grow. With the towns many times they fragment ideologically, which prevents a community organization, but even so we learn to continue growing.

This work has the shape of a hut. In the field the main thing is to have a good harvest, good fruit. Sometimes due to the need to find an economy, they migrate to the city, to the largest towns, cross other territories, get to know other cultures and other ways of life. What receives them is the difficulty with the language, and when they travel to other countries, sometimes they lose their lives and find a sad reality that is death. 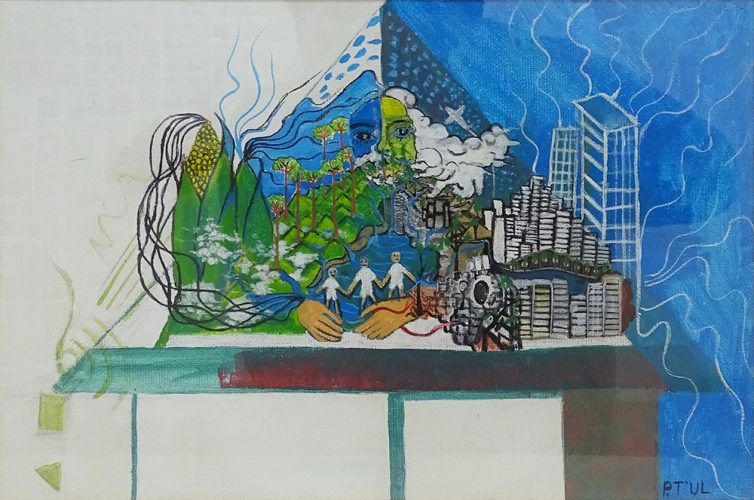 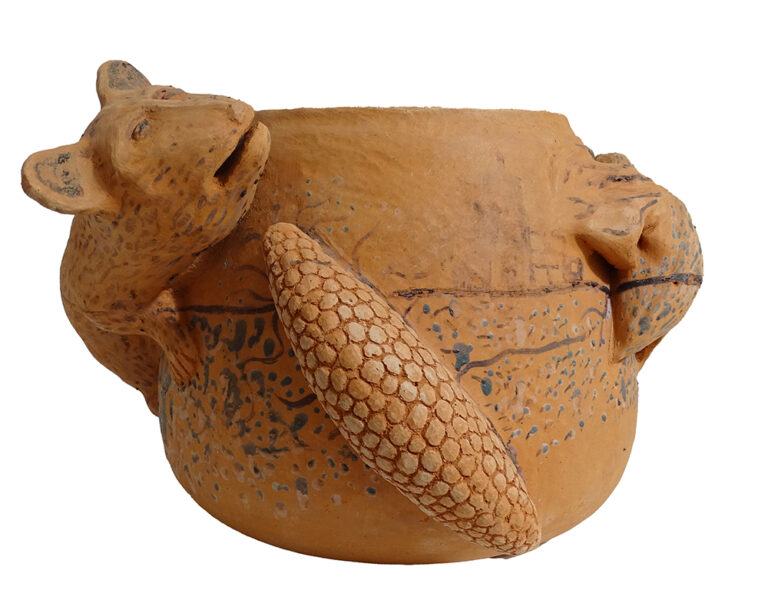 It is a small vase that has a weasel, a bat and corn, as an ornament and many plants and trees in the background, the place where they live. There is also a small town that grows over time.

New events are taking place within our communities; The pieces focus on what destroys us, such as paramilitary groups, displacements, territorial disputes and cultural divisions, these divide the people. 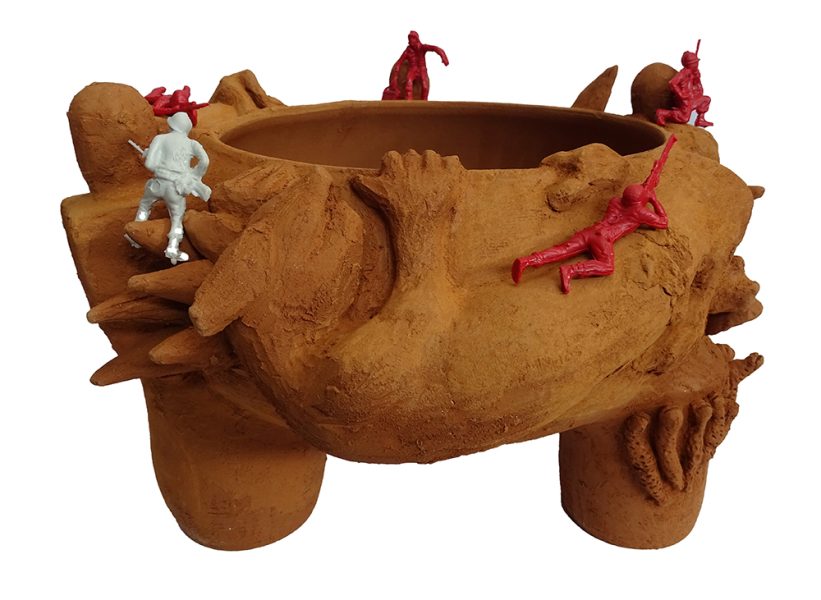 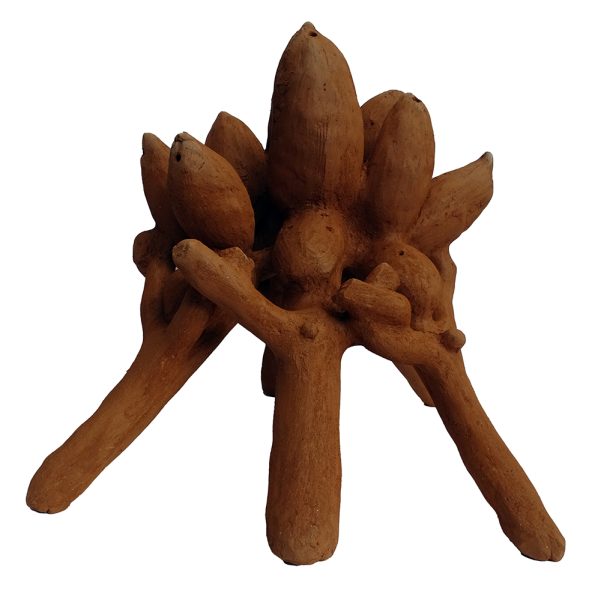 It is a representation of the dialogues where many ideas are generated, but also conflicts.

It is a little bull that has the shape of a vase on the belly. It is related to the fact that these animals are sacred in the traditional pieces. They are offerings for the holidays. 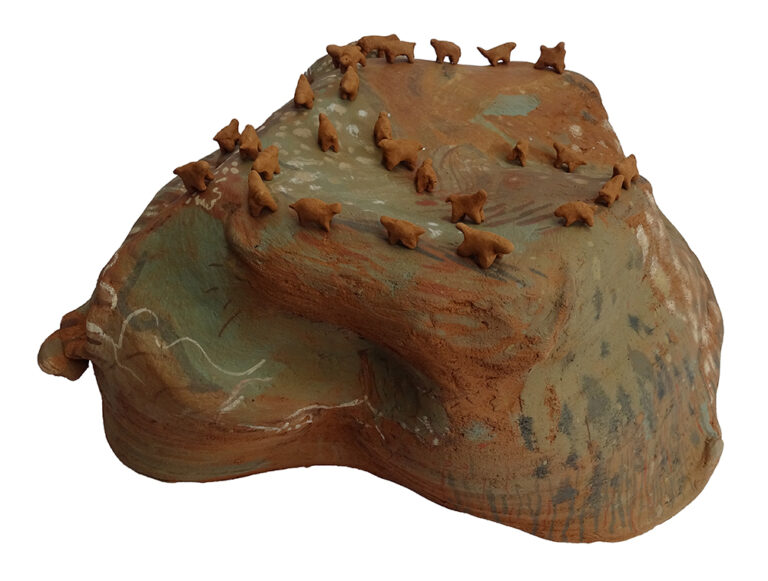 It is a sculpture of the place where the beings of the forest live, the owners who take care of the vegetation, the sacred places. The town takes care of it because it is a strength for the community to have nature reserves.