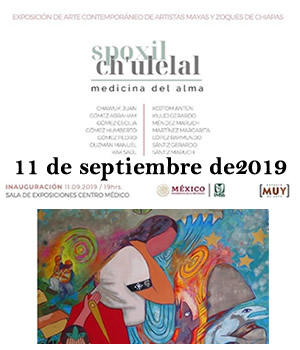 Spoxil Ch’ulelal:
Medicine of the Soul brings together artists who speak five languages ​​originating from the Mayan and Zoque families, from the state of Chiapas, who, from the new indigenous art, invite you to learn about their proposal on health, a holistic concept in which they integrate aspects of the physical, spiritual, natural and sociopolitical.

More than 40 works of painting, photography, sculpture, video and installation are shown here. They have been carried out by 16 women and men, with different circumstances – some self-taught and others trained in the academy, with a long or shorter career – who together interact on problems and relevant findings for the double look: inside and outside the town, approaching a vision of multicultural Mexico.

Today’s indigenous artist is an ingenious creator with a disposition towards the multimedia and collective, and due to his functions, he is both an interpreter and a representative of his culture. In this way, the original artists are heirs to the traditional role of healers: they heal with art.

The realization of this exhibition has been possible thanks to the collaboration of the Mexican Social Security Institute with the MUY Art Space Gallery. The works belong to the MUY Gallery collection and to the personal collections of their creators.

Let’s celebrate the men and women of the corn!
“I am aware that the knowledge of the past may not seem to have as much meaning today, but if we assume our reality as a three-dimensionality between the past, the present and the future, we would learn to listen and understand the messages of our ancestors. We are a new generation with transcendental demands for the future and aware that our origin gives us the greatest meaning of our lives”. 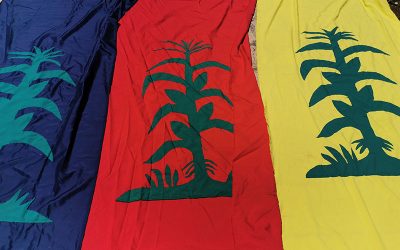 “I use some elements related to the memory of the Tseltal people in Tenejapa. There are four chargers; when the earth shakes it’s because the porters get tired of one arm and switch to the other. I represent the tectonic plate with a graphic pre-Columbian design. The woman is the ancestral mother earth, with a desperate cry. In his right hand he holds the damage or wounds caused by oil extraction, wars, atomic bombs or deforestation. On the other hand, the earthquake that happened on September 7 with all the damage it left on the Coast and in Los Altos. Mexican society joined those pains, by giving a hand to help. I also represent the eye of mother earth, the eye of the plants; life begins to flourish and at the top there is a new house”.

“There are no more trees, mamacita, they finished everything around the river, it’s bald, scrambled!” A lady from the La Nueva community narrates how the sacred place of her ancestors is found.” 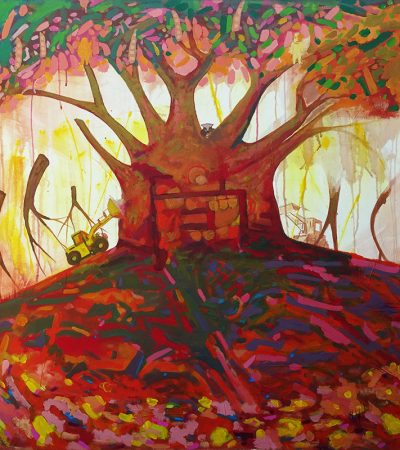 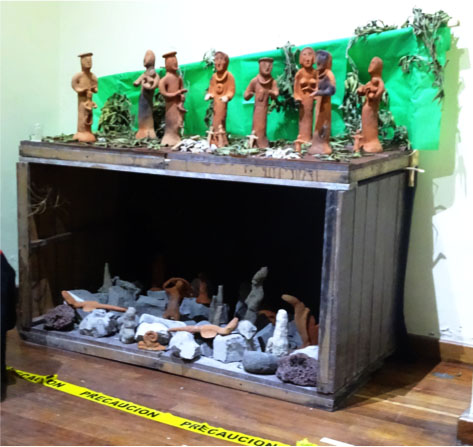 “The first beings were inside the earth, but they came out onto the face of the earth. We are here but we do not see that the goddesses of the earth are on the same face of the earth. They talk to the God in Heaven. There are devils inside the earth, they kill human beings. They can make it rain, but hard and long, eight days, and a lot of water. Then comes the tremor. But it doesn’t always kill us. When the earth falls, yes, it kills us. If the earthquake comes — it’s ferocious — and we immediately speak to the Earth Goddess. We ran out of the house. There are ugly animals — evil at heart — within the earth. They cause the tremor. The men who go out to the field, talk to God so that he protects them”. 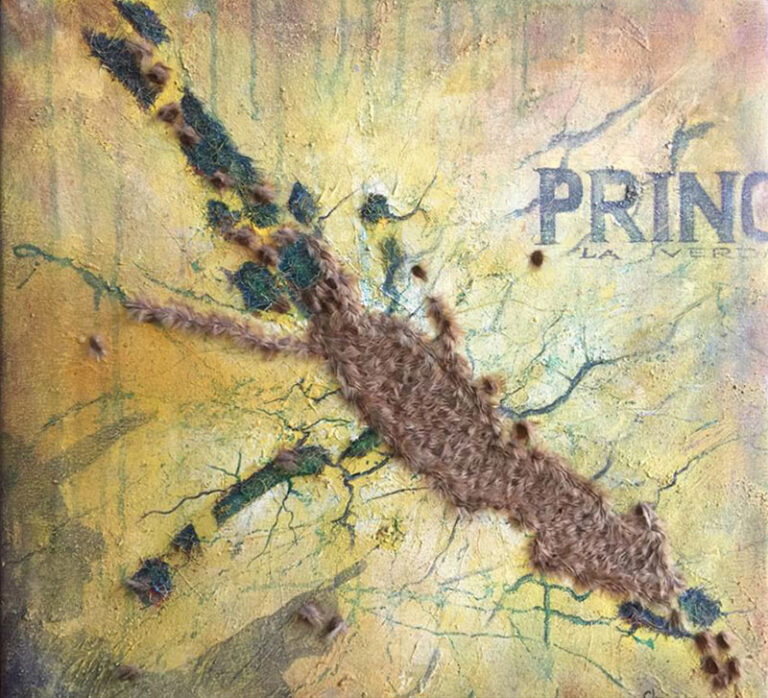 “A work of organic abstraction with topographical suggestions, “PRINC” marks the beginning of the creative territory. What is the brown material? “They are jungle seeds, guardians of poetic lineages”, replies the artist”.

“It is based on the memory of the five children who died in Larráinzar in the landslide of a wall that had been damaged by the earthquake. I speak in a general way of the misfortune that happened everywhere, I put the root that means that mother nature gives us and takes our lives. He doesn’t see if we’re rich or poor”. 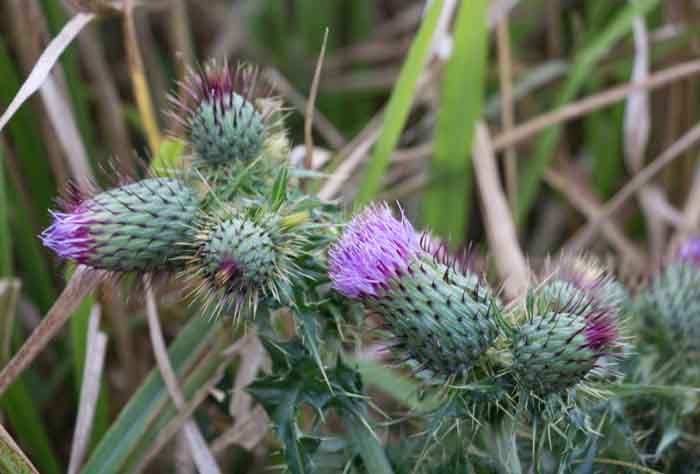 “The thistle flower is used to deflate and cleanse the liver, cut 2 or 3 flowers with 1 liter of water, boil for 5 minutes, drink a cup in the morning, one at noon and one in the afternoon. Treatment is for a week”.

“There was a man who went to the cemetery, and leaving his pants and shirt, became a goat. Then he went to the house of a sick boy, jumped in while his family slept, and drained the sick boy’s blood until he died. He put it in a bottle, and gave it to the patron saint of the cemetery (the devil). Later he came with a friend who learned everything from the man-goat and between the two of them they treated a sick girl. But the first man was malicious and the friend ended up alerting the girl’s family. They killed that devil and the girl was cured.” 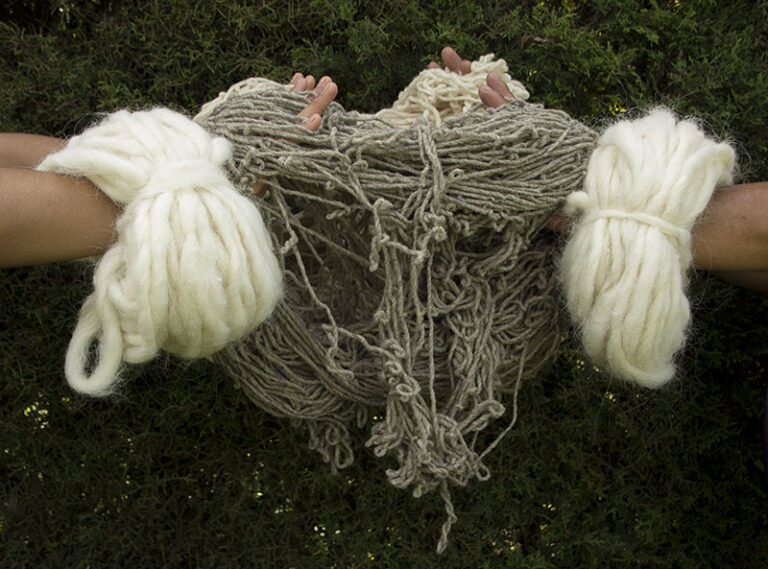 “The hands intertwined with the threads stand out in a metaphorical way of how Tsotsil women weave relationships with each other, relationships of care with others, pulse and collective strength. Textile activities create conditions to collectively feel-think the power of the bats’i antsetik “true/original women”.”.

“In the town of San Andrés Larráinzar, women let their hair grow, the years go by and they do not cut it, long hair represents beauty. When they have a position they make a braid that fits around the head, it is a symbol of knowledge and wisdom experienced by the ancestors and a sign of authority. They are seen with respect and called for the position they have held, for having the strength to resist and contribute to the responsibilities that the people need.”. 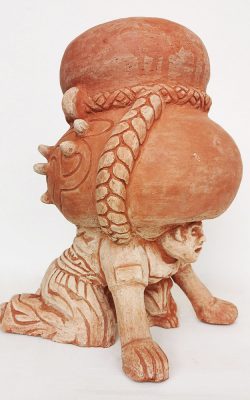 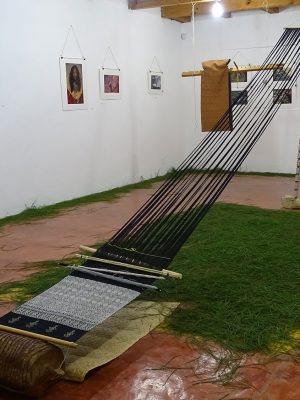 “This piece represents life, the relationship with people in the community and city. The threads represent the blood that moves. Another symbol is that of the road, before there was no road, people walked on the sidewalks. The rhombus represents the center of the universe and the cardinal points. (Now through television, social networks, we have lost our values.) In the piece is the symbol of man and woman. There must be a reconciliation, a recognition — both are important — men and women can weave! Before they insulted the men who knitted, they said they are homosexual. But now there must be respect, it is an opportunity, there are discussions, a lot of criticism, there are men and women who are interested in textiles. There is also the frog symbol that represents rain and sowing in spring time”. 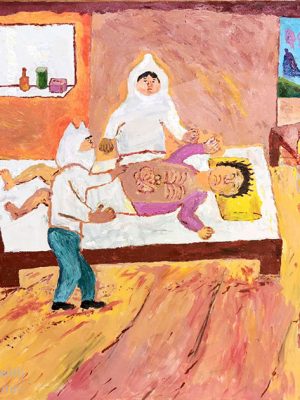 “When I had surgery in the hospital”

“Manuel, as a Catholic, fervently paints dreams and mythical and historical history with a traditional vision of the people under the gaze, protection and, on occasion, disapproval by the saints and God himself. “I painted the day of my operation, in the hospital where the doctors and nurses who treated me are, and I also painted the empty medicine containers”. 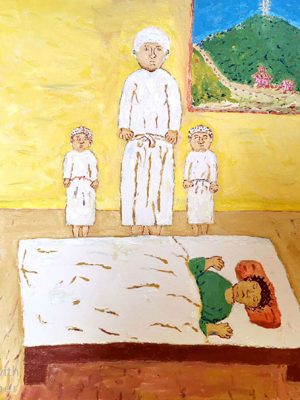 “The doctors told my relatives that I was not going to survive, because I could not eat. So my relatives looked for other people who would pray for me so that I would be cured. One day I saw Jesus with his angels in front of a sick man. After I saw Jesus my relatives fed me and I was able to eat, it took me several months to start walking. In their dreams, my relatives told them that I had an accident because I stopped receiving the host, but Jesus let me live”. 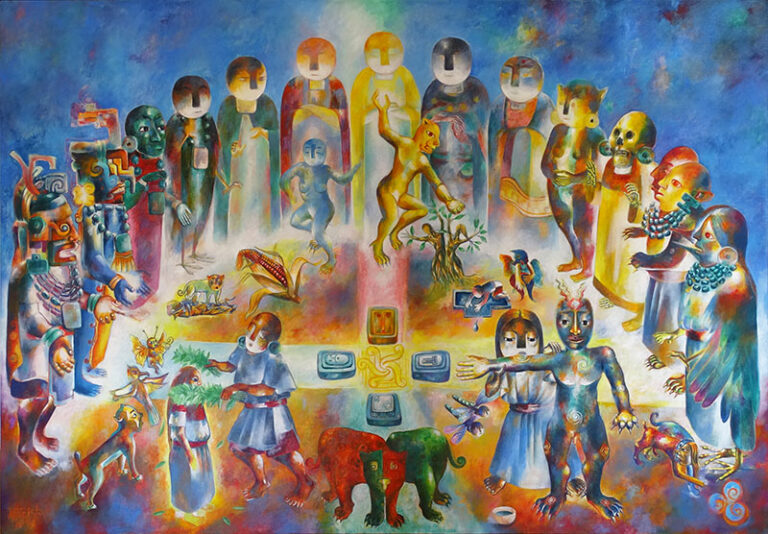 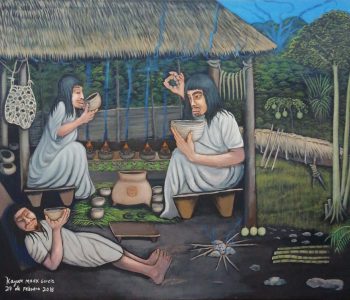 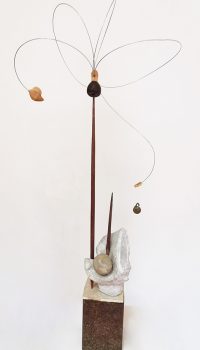 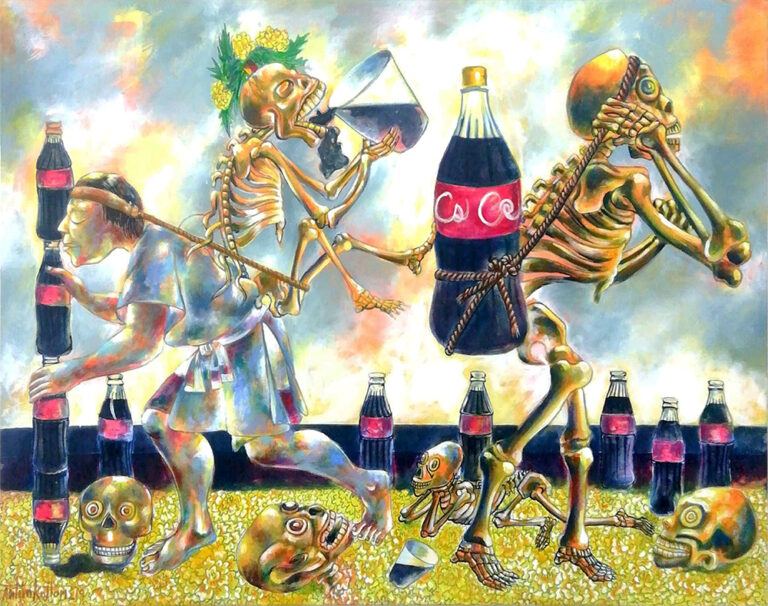 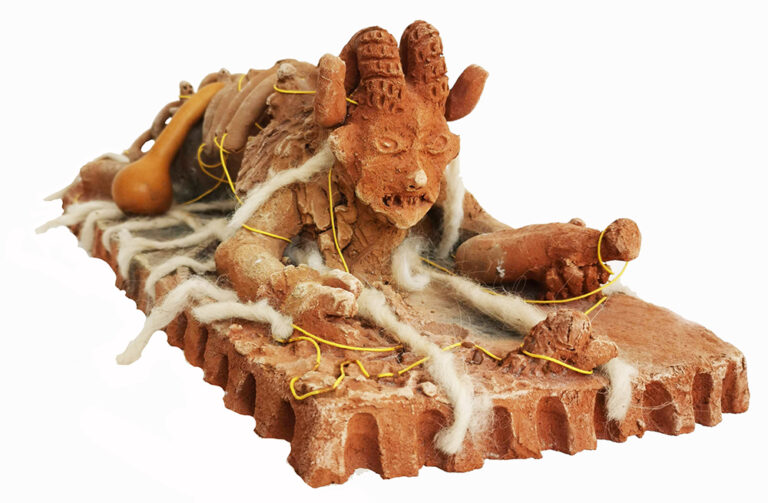 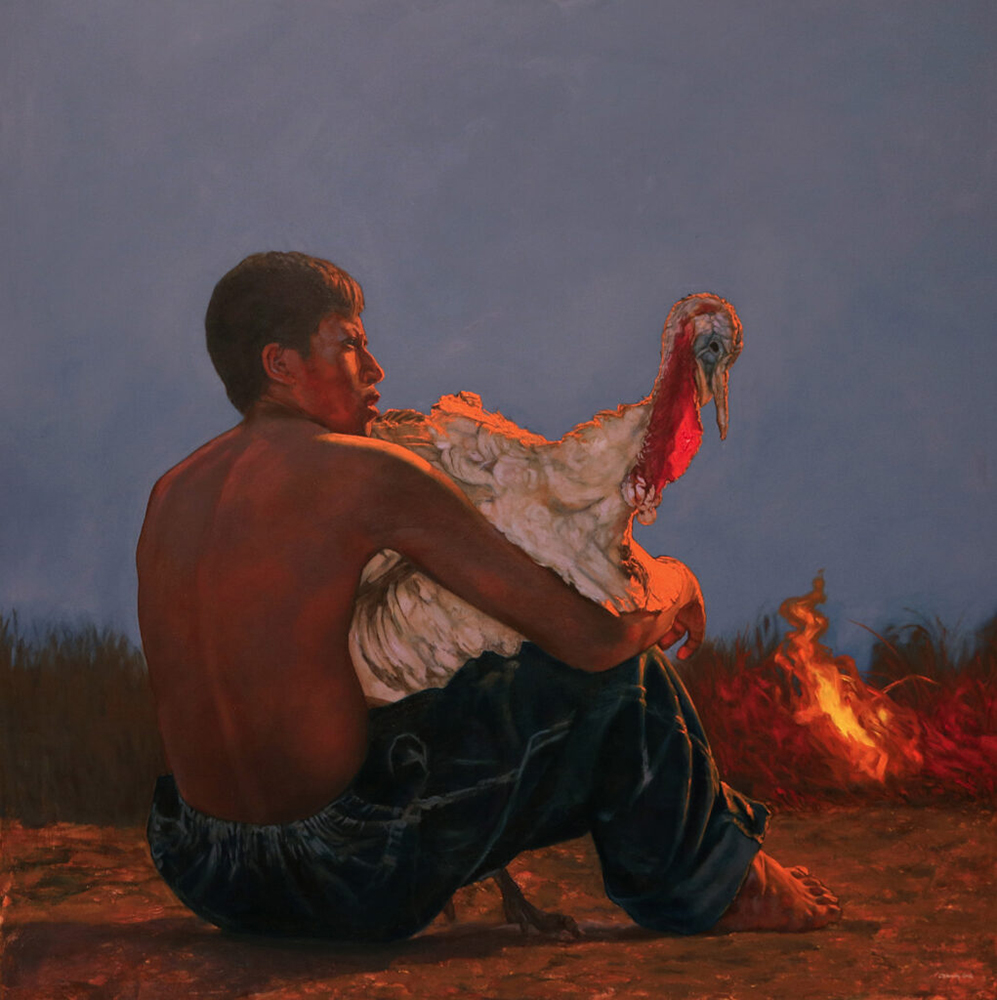 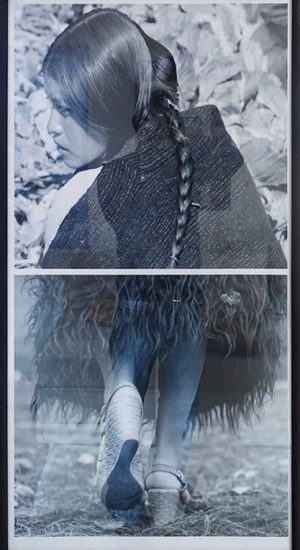 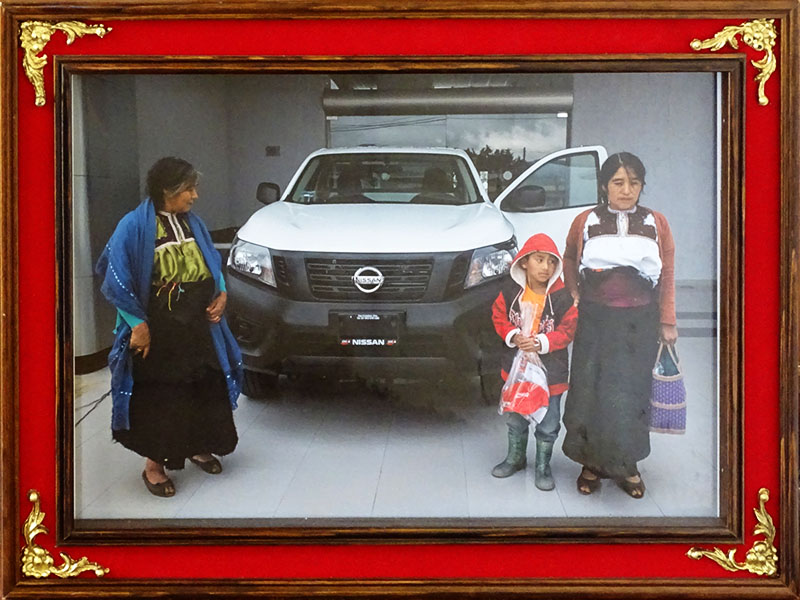 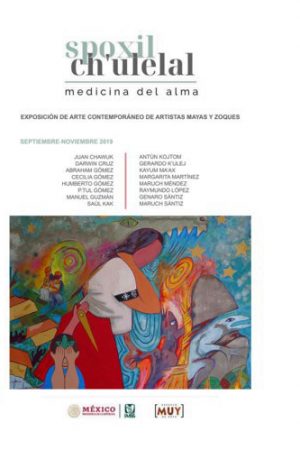